One of the most common reasons to use mouthwash is to fight against bad breath. But how effective is mouthwash really at beating the symptoms of halitosis, what should you look for in a bad breath mouthwash, and what are the best mouthwashes on the market?

The Benefits of Mouthwash for Bad Breath

It has been estimated that between 30% and 50% of the population suffer from bad breath, at least on occasion(1).

While there are a range of different causes of bad breath, scientists and dentists generally agree that the majority of bad breath problems stem from the mouth(2).

One such study, for example, in Switzerland took place over a seven-year period and found that 96.2% of halitosis comes from the mouth(3).

Drilling down further, it is known that the most common cause of bad breath is “bacterial putrefaction and the generation of volatile sulphur compounds” in the mouth(4). In short, oral bacteria feed on leftover food particles and sloughed oral skin cells, producing unpleasant odours in the process.

An essential step in getting rid of bad breath is, therefore, to eliminate these bacteria, thus naturally freshening the breath.

Numerous studies have been carried out to test the efficacy of mouthwash for fighting halitosis, and there can be little doubt of the results. Scientific studies have found, for example, that “mouthwash is effective in reducing oral malodour” (5).

Bad breath mouthwashes, therefore, represent an effective way to counteract unpleasant-smelling breath in a very practical fashion. In short, “halitosis can be successfully reduced via daily use of mouthrinses” (6).

What to Look for in a Bad Breath Mouthwash

The market is full of different mouth washes, so the obvious question is; what differentiates one mouthwash from another?

Are some products more effective than others? What should you look out for when choosing a mouthwash for bad breath?

Most commonly-available mouthwashes can be separated into two categories; those that mask the unpleasant smell of halitosis, and those that specifically treat the root cause of the problem.

In many cases, cheaper mouthwashes are, in reality, little more than mint-flavoured liquid, designed to cover unpleasant oral odours. For obvious reasons such mouthwashes, while effective in the short term, soon cease to work. Some studies suggest that these mouthwashes only offer effective protection for between half an hour and an hour. With such a mouthwash, therefore, you’ll need to be regularly re-applying it for long-term protection.

Therapeutic mouthwashes, in contrast, aim to treat the cause of halitosis by eliminating the bacteria known to cause the majority of bad breath. In doing so, they offer far greater levels of protection.

According to one scientific study(7) which examined a range of different mouthwashes, within one to three hours of use “the anti-odour activity is due solely to its anti-microbial action”.

Some premium mouthwashes offer up to 12 hours of protection, meaning that a twice-daily oral care regimen can offer around-the-clock protection.

Many popular mouthwashes use alcohol in an attempt to fight sulphur-producing bacteria. While there is some evidence to suggest that alcohol may have anti-bacterial properties, this is often negated by the more negative impacts of alcohol in mouthwash.

Firstly, alcohol is known to dry the mouth which is, in itself, a common cause of bad breath. According to one study(8), xerostomia (dryness of the mouth) has the “potential to cause or enhance malodour”.

Secondly, there is some evidence to suggest a relationship between alcohol in mouthwash and the development of oral cancer. The study in question(9) stated that “it would be inadvisable to recommend the long-term use of alcohol-containing mouthwashes”.

Lastly, of course, some people find that the alcohol in their mouthwash can lead to unpleasant side-effects, such as swelling of the gums or oral mucosa.

A range of different ingredients can be included in bad breath mouthwashes, though some tend to be more beneficial than others. Here are two to keep an eye out for:

Chlorine dioxide is a compound which has been used around the world to safely disinfect drinking water. Little wonder then, that a number of studies have assessed its ability to fight bad breath in mouthwash.

One study showed that using a chlorine dioxide-containing mouthwash for just seven days can reduce morning breath. The same study(10) found that the compound was also effective in “reducing plaque, tongue coating accumulation and counts of bacteria in the saliva”.

Another(11) found that “chlorine dioxide mouthrinses can be effective in neutralisation of odourous sulphur compounds”.

Toothpaste manufacturers have been adding fluoride to their products for decades. Fluoride is known to strengthen and protect the teeth, which then makes tooth decay far less likely.

Tooth decay is often linked to bad breath, as bacteria are able to gain hold. As a result, fluoride-containing mouthwashes can assist with protecting your mouth against future problems.

What is the Best Bad Breath Mouthwash?

UltraDEX’s award-winning range of oral care products include three different oral rinses, all highly effective against the problems of halitosis.

Our Daily Oral Rinses don’t just mask bad smells – they deal directly with the cause.

Our oral rinses effectively protect teeth and gums by killing the harmful bacteria which can cause tooth decay and bad breath. The anti-bacterial properties have been shown to offer 12-hour protection against oral malodour. As a result, when used twice daily, UltraDEX Daily Oral Rinse offers complete protection from concerns over halitosis.

All our mouthwashes for bad breath include chlorine dioxide for a superior clean, and fluoride to strengthen and protect teeth from decay. 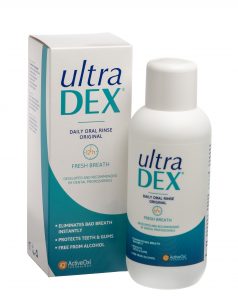